I’ll be upfront with you: I’m making this post because I took a pretty picture of my mini-cheesecake and now I feel like a pro. 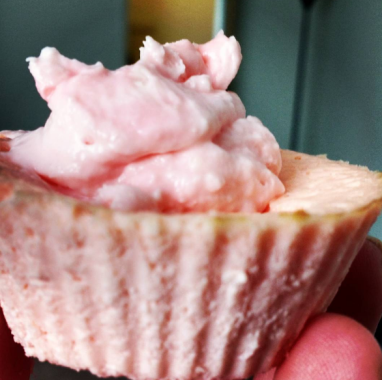 But just look at this thing! It’s got all the right texture, and definitely the right taste – it’s a cheesecake made in heaven, crying out to be devoured for a quick, fat-rich breakfast.

Ever since starting my Ketogenic journey, I’ve been avidly following I Breathe I’m Hungry as a great resource for recipes and inspiration.

I have always loved cheesecake; for my birthday each year, I would go to my dad’s house and use his Kitchenaid mixer and his springform pans to make my own birthday cheesecake. It was a delightful tradition, but I always thought you needed a springform pan to make a cheesecake, and I make cheesecake so seldom that I couldn’t justify buying one.

I’ve been ‘meaning’ to make cheesecake forever, and simply hadn’t gotten around to it by the time I tried cheesecake bites the week before last.

Originally, I just followed IBIH’s recipe with no alteration, but this time I made it strawberry flavored – next time, I think I’ll even do an almond flour crust, or maybe try coconut flavor with unsweetened flaked coconut in it!

Adapted recipe below the cut, with all credit to I Breathe I’m Hungry.

END_OF_DOCUMENT_TOKEN_TO_BE_REPLACED

Where does the time go?

It’s my little sister’s last week staying with us. I honestly didn’t realize this until she pointed it out; it’s been so wonderful having her here, I can’t believe the summer is ending!

I’m really sad about this, but that’s how it goes, isn’t it? She says she thinks she’s lost weight while she was here, but I find it hard to notice one way or the other – she’s a beautiful young lady with a small, adorable tum which seems perfectly healthy. Any time her shirt rides up I just have to poke it and make baby noises at it, which she doesn’t seem to appreciate much.

Last week’s meal plan more or less didn’t pan out because someone didn’t buy the requested groceries – that seems to be the primary point of failure for this stuff, though, I’ll be honest, it’s been a bit of a lower energy week this week so even if he had, who knows if we would’ve done it?

For want of ingredients, we didn’t do cheesecake bites, jalapeno poppers, or zero carb muffins; we had Wings on Sunday, but didn’t bother with recipes, just powdered them with baking soda and a mix of spices and baked them.

We did end up doing pan-fried sausages and broccoli, but instead of adapting the linked broccoli recipe, I steamed two heads and then improvised a cheese sauce out of cheese, cream, cream cheese, and some seasoning; this was very popular with both Fiance and Sister, if extremely calorie dense. That’s alright, though – we don’t tend to eat much during the day, the bulk of our calorie intake happens with dinner.

We’re going to cheat on Saturday to have a really nice goodbye dinner with Sister, where we’re ordering Vietnamese food from our favorite takeout place and baking a cake; this will delay Real cheat day for a week, but that’s alright.

Here’s what’s up for this week!

END_OF_DOCUMENT_TOKEN_TO_BE_REPLACED

This week has been mostly just ‘alright’; there were a couple of successes, and a couple of flops.

Of note, the bacon cheeseburger casserole was something of a flop; it was like … meat loaf? But mushy and bland and watery. I messed up by forgetting to add almond flour/psyllium husk, that might have made a difference, but overall I just wasn’t very impressed with it. Same thing with the cauliflower potato salad. I guess I just don’t like potato salad well enough to crave it.

The jalapeno popper chicken, while a good concept, didn’t really work for me either.

With that being said, the caramel frosted cheesecake bites were to DIE for, the bacon and zucchini eggs in a nest were awesome and we re-made them a few times throughout the week for breakfasts, and making Wings at home was FANTASTIC!

I misplaced my cell phone, so no crappy cell phone pictures this week, but here’s next week’s plan. We’re going to do a few snack-foods for eating throughout the week, to shove in the fridge and eat as we’re hungry.

END_OF_DOCUMENT_TOKEN_TO_BE_REPLACED

This week has been productive and delicious, recipe-wise; standouts were cauliflower nachos (which I overcooked past ‘nacho’ and more towards ‘casserole’, but because they were so tasty and simple, I ended up making them again for brunch on a lark). The zoodles with meat sauce were also incredibly delicious, and really hit the spot. 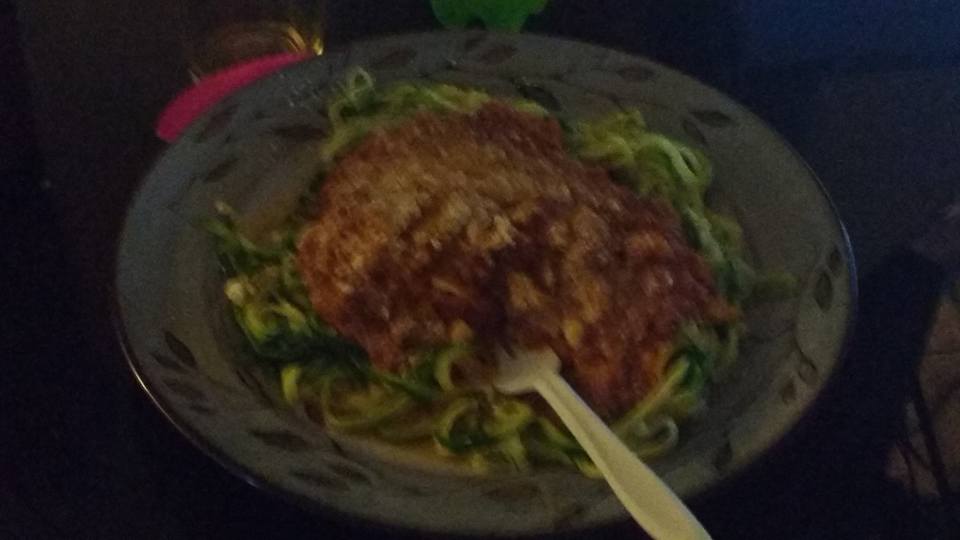 Honestly, there were no duds this week, meal-wise – except maybe the cauliflower mac and cheese, which I didn’t do great on, and we ended up ordering out for Pizza Day because I was too drained to cook.

On Sunday, which is when we usually end up cleaning, sister and I cleaned out the fridge mostly by accident – it was really empty, and the shelves were messy, and somehow we ended up pulling out all the drawers and shelves and giving them a good scrub. Having a clean fridge was super inspiring. 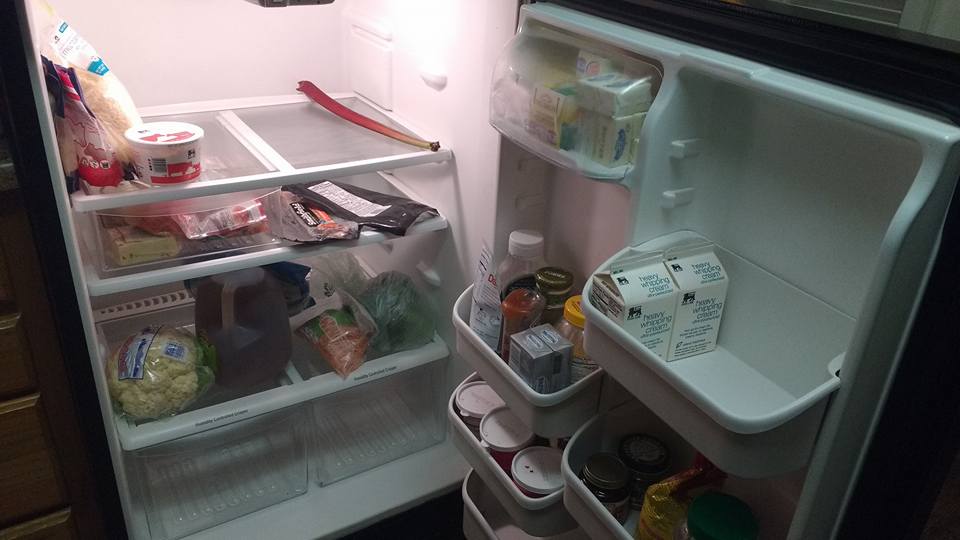 Here’s the menu for the upcoming week; I’m worried it may be a little ambitious, and I’m feeling a bit down lately, but the recipes are, for the most part, pretty simple.

END_OF_DOCUMENT_TOKEN_TO_BE_REPLACED

Not really much to say on this week. Mental health funtimes are sort of getting the best of me here, but I’m trying to keep on mealplanning. Saturday’s spaghetti squash hashbrowns from last week’s plan were pretty mediocre – it tasted much better just by itself.

Of note was the sausage zucchini boat recipe – it was SO good. Annika and I fought over the last one, even RJ liked it.

Had a few low-energy weeks, mental health stuff and the like, but I’m trying to drag myself out of the pit of despair and part of that is sticking to the planning. Creating meal plans and following through makes me feel good about myself, so here we go.

The last few weeks we’ve had a lot of quick meals, like bacon and eggs, and our favorite cabbage salad, the recipe for which I’ve now fully made my own. I no longer measure for it, and tend to just go with whatever seems good – it’s always a hit. I add some PB2 powder and sesame oil to the dressing, and oh my god is it good. I’ll be doing a full post on my adapted recipe soon, but suffice to say, it takes five minutes to throw together and is pretty much the bomb.

Without further delay, here’s the plan for this week – 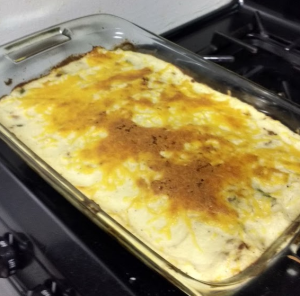 So it was Annika’s first full week of Keto, and I have to say, she’s surprised me.

My first full week, I pretty much whined nonstop about how much I wanted carbs – I wanted popsicles, I craved bagels, pasta, potatoes, a sandwich oh god I would have killed for a sandwich!

But she seems to be doing fine-?

Her energy is definitely high, she’s been enjoying snacking on cheese, and she’s been a huge help with keeping motivated. Since she arrived, we’ve been going for walks together and excitedly spending the whole walk chattering about silly story things, which is great.

I also feel like I, personally, have pushed past a plateau! 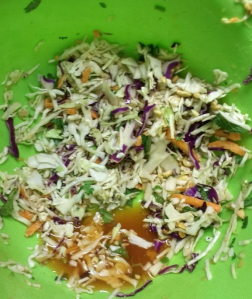 I don’t have a scale, but this week I have abruptly noticed that I don’t have to hold my head at strange angles to avoid a double-chin when taking pictures of myself. I also noticed when we started walking that I can walk at least three times as far as I could a few months ago, and one of my skirts – a loose one – is now borderline unwearable because it keeps falling off, which is awkward!

I’m really happy about this. Keto is really great.

This week’s dietary winners were –

As far as the other recipes went – RJ’s Hasselback Chicken was alright, but awfully bland. He wants to give it another try, but this time with much more seasoning and maybe marinating the chicken. Also, wrapping it in bacon. Everything is better with bacon.

The tuna patties were awful. I was really disappointed in them. Guess it’s back to the drawing board on meals involving canned tuna.

Instead of Masaman Curry, I made Panang, and it’s probably the best Thai curry I’ve made on Keto, but it’s just not quite the same without real rice – cauliflower rice doesn’t really absorb.

We’d doing Zoodle Alfredo tonight, I have high hopes for it!

Here’s the plan for the coming week – I have Monday off as a holiday, so I choose slightly more ornate recipes!

END_OF_DOCUMENT_TOKEN_TO_BE_REPLACED

This is a text widget, which allows you to add text or HTML to your sidebar. You can use them to display text, links, images, HTML, or a combination of these. Edit them in the Widget section of the Customizer.
ketogenicrambles
Create a free website or blog at WordPress.com.